2018-19 Player Review: Pierre-Edouard Bellemare may have played his last game with the Golden Knights

Vegas, by way of depth, may have to move on from its fourth-line center and one of its best penalty killers.

Share All sharing options for: 2018-19 Player Review: Pierre-Edouard Bellemare may have played his last game with the Golden Knights

In the 2018-19 Player Review series, we will evaluate the 2018-19 performances of each member of the Golden Knights. Players were evaluated based on overall performance in both the regular season and playoffs, especially with regard to pre-season expectations and how that player performed in his particular role.

Pierre-Edouard Bellemare is a national treasure. End of story. Thanks for reading.

I’ll tell you why, but only because you asked so nicely. No. 41 may be a fourth-liner, but he’s first-team all-stud in my book. His leadership and personality are a true asset to the VGK locker room and he is one of the first people you’d want to talk to following a win, loss, or practice. On top of being a great guy, the man can play. Although he missed the last game of the playoffs, Bellemare has built a reputation of being an iron-man, give-it-your-all type of player in his five-year NHL career. He didn’t make it to the league until the age of 29, but he has certainly carved out a role for himself for the foreseeable future.

Never a big point producer, he finished the season with six goals and nine assists. While those numbers won’t knock your socks off, they are more than acceptable for a fourth-line, penalty kill specialist. His line, coined the “Meat Grinders” by Ryan Reaves, even stood out at five-on-five play during some of the tougher times of the Golden Knights season. We don’t speak of that era, but I’m talking about the Schmidt Suspension period. When the team needed him, he (and his linemates) delivered.

Taking a dive into the underlying metrics, he certainly comes across as a “plus” player. Putting my love for our dear, sweet Pierre aside, it is easy to objectively see that he still has a place in the league. He’s an intelligent player that can competently fill multiple roles. Even more impressively, the man finished the season with just six penalty minutes. Six! With three whole minor penalties in 76 regular season games, the man is clearly a saint, rivaling the great Dorothy Mantooth.

Although I’m about to use them, a quick glance at the metrics could very easily tell the wrong story about our boy Bellsy. He comes in at under 50 percent in Corsi For %, Fenwick For %, and Scoring Chances For %. Man, that guy stinks, right?

Bellemare’s value comes in his defensive game, both on the PK and at 5-on-5. If you want to know what Bellemare brings, look at the High Danger Chances. On the season, 218 high danger chances were created while he was on the ice, versus 183 for the opposition, resulting in a super solid HDCF% of 54.36 percent. Just for posterity, the league leader was St. Louis’ Pat Maroon of all guys, with a 65% HDCF%. He didn’t achieve these numbers against cupcakes either. Bellemare’s line was regularly deployed against the opposition’s best point producers, making his positive HDCF% even more impressive.

Let’s get a bit unconventional here. Bellemare’s standout moment of the season could be one in which he physically did nothing. Does that make any sense on the surface, no. Has he done great things on the ice, yes. Am I still correct, obviously yes. Now just hear me out.

In Game 7 of the first round of the Stanley Cup playoffs, the Golden Knights took the ice without their fourth-line center, in a game that would go down as the most painful loss in their short history. We all know the story. VGK got out to a lead, the Sharks looked like dog shit, and then poof, the bad guys won the game.

Let’s not get into “the penalty” and instead we will look at Bellsy’s standout moment.

Unfortunately, the Golden Knights got the crap end of a five-minute major penalty against a solid power play team in the Sharks. With their number one penalty-killer in the press box, the Golden Knights gave up four power play goals in a span of 4:01, in the third period. Say what you want about “the penalty heard round the world”, but that is unacceptable and admittedly embarrassing for a club who boasted a solid PK for the greater part of the regular season.

You might be wondering, “how is this Bellemare’s standout moment”?

Glad you asked. If the Golden Knights’ assistant captain and penalty-killing ace wasn’t out injured, the Sharks don’t get more than a goal or two on that five-minute, gift of a power play. This past season, Bellemare was on the ice for a total of 18 power play goals against, in a team-leading (for forwards) 147:54 of PK time. Rounding up to 148 minutes, we get an average of one goal per eight minutes played. If that average held true, the Sharks get one, maaaayyybbbbee two PPGs on the Golden Knights. You know because of line changes and stuff.

Do averages hold true, especially in Game 7s against a division rival that hates you more than a toddler hates broccoli? No, not always, but Bellemare most likely would have made enough of a difference to stop the Sharks from stealing the game. His leadership, hockey IQ, and overflowing heart are high-value commodities that the Golden Knights sorely missed. He was forced out of the lineup, due to a knee injury he suffered in the waning moments of Game 6. As if being named Pierre-Edouard isn’t boss enough, Bellemare had the following to say about the costly PK, further cementing his role as the coolest guy in the world and my personal spirit animal. 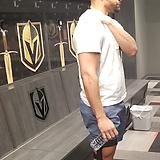 Well, he’s not cocky, so I’ll say it for him. If Bellemare’s knee was fully functional, the Golden Knights would not have given up four goals on that dreaded and undeserved penalty kill. His presence alone is a huge advantage for the men in grey and gold and losing their PK ace was a killer. Bellsy, be less humble. You da man.

If my Standout Moment, that wasn’t technically a moment, wasn’t enough to satisfy you, here’s Pierre-Edouard showing off his skill on both sides of the puck. I’m here to please, people!

Tisk, tisk. I know what you were thinking, you nasties.…

Sadly, our noble Frenchman will be an Unrestricted Free Agent as of July 1st. Out of all the Golden Knights’ UFAs, Bellemare may be the biggest loss. His value was quite evident as the VGK PK broke down late and the team was booted from the playoffs. With an overwhelming amount of center depth and a tricky salary cap situation, it seems unlikely that the team will bring back the 34-year-old center.

Depending on the severity of his knee injury, which Gallant advertised as a “two or three week” ailment, Bellemare should be fielding offers from multiple teams on the open market. He could be useful to every single team in this league. Find me a team in the league that wouldn’t benefit from a guy of Bellemare’s character, skillset, and leadership. He will be much sought after this summer and rightfully so, with his reasonable cap hit of $1.45 million per season. He made it very clear on locker cleanout day that he is not looking for a one-year deal and I don’t see him needing to settle for a one-year or a low-ball offer. He should have plenty of suitors.

Replacing Bellemare will not be easy, specifically on the PK and in the locker room. He is one of those character guys that just makes the room feel good. His work on the PK is unquestioned and guys like William Karlsson and Paul Stastny will carry more of the load next season, if Bellemare is not retained. Karlsson remains in limbo as an RFA once again, but George McPhee will most-likely find a way to keep him around. Erik Haula and Eakin should round out the bottom-six down the middle.

In his final moments in the locker room at City National Arena, the pending-UFA mentioned that he will not be sitting around, dwelling on his contract status.

“I’m not the kind of guy who thinks too much about this kind of stuff,” he said. “I have a beautiful family and the season ended way too quick, so we’re gonna be here for a little bit. I’m gonna enjoy the weather that I don’t let myself enjoy too much during the season.”

So smooth, so gracious. Regardless of where PEB ends up, he will find success. He is a man who embraces his role, looks up to his scoring-heavy teammates, and works to support them. He prides himself on his faceoff ability (54.7%), his penalty-killing, and doing his best to “help the team”. The man even refers to faceoffs as “an art”.

Last offseason, former assistant captain David Perron ended up back with his pre-Expansion Draft club and it wouldn’t be shocking to see Bellemare follow that trend. He could very easily land back in Philadelphia, with a team that desperately needs help on the PK. Their subpar 79.76% kill rate, below the league average, calls for an inexpensive yet effective player of Bellemare’s ilk. If this was indeed his last season in Vegas, he will be sorely missed, not just by his teammates, but the city of Las Vegas as a whole.

More From Knights On Ice