Primeau, one of the Golden Knights’ 2019 draft picks, comes from a long line of elite hockey players, and looked the part during his first Development Camp.

As a general manager, there is no way of knowing the athletic ceiling of any given player on your draft board, especially in the later rounds. Although there are numerous scouts putting in grueling hours and miles for each club, there are going to be kids these GMs do not know. In the fifth round of this year’s NHL Entry Draft, the Golden Knights’ brass decided to go with a name most hockey fans know quite well: Primeau.

Not Keith, the former Philadelphia Flyers captain who scored 619 points in 909 games after going No. 3 overall in 1990. Not Wayne, the NHL veteran drafted 17th overall in 1994.

Not even Cayden, the young goaltender selected 199th by the Montreal Canadiens in 2017.

But Vegas selected Mason Primeau with the 141st pick in this year’s draft from the North Bay Battalion of the Ontario Hockey League (OHL). Mason, son of Wayne, nephew of Keith, and cousin of Cayden falls right in line with his family of predecessors, standing a stout 6-foot-5 at the ripe age of 17. 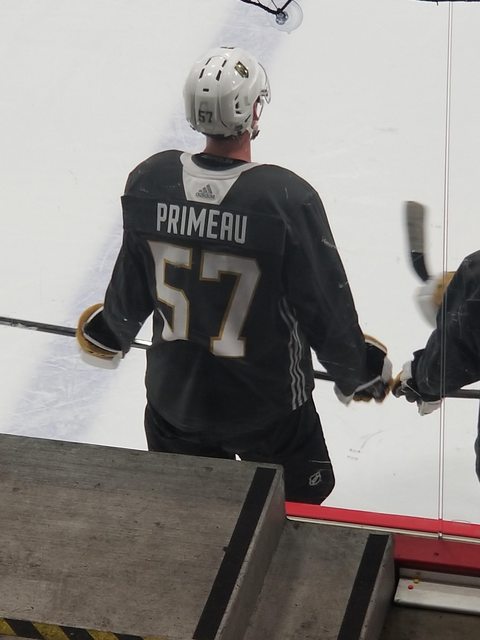 Finding Primeau on the ice is quite easy, as he was taller than any other player not named Keenan Suthers (6-foot-8). Primeau is still young and has some bulking up to do, but one look at his lineage proves that will not be a concern. Uncle Keith came in at a solid 6-foot-5, 220 pounds and dad was no slouch himself standing 6-foot-4 and weighing in at 225 pounds.

Throughout development camp, Primeau had a solid showing. As a member of Team White, he lined up against some talented players in Jake Leschyshyn, Ben Jones, Lucas Elvenes, and fellow draft pick Pavel Dorofeyev. It is not out of the ordinary to see the youngest players overwhelmed and dominated on the ice by some of the more established guys in camp, but that didn’t happen to Primeau.

“I’m one of the younger guys at camp here, so I’m just trying to be like a sponge and soak everything in,” he said.

He clearly has the right mentality and came into camp much humbler than some would, coming from a legitimate NHL family.

For Primeau, taking more of a back seat seems to be a new role, but he knew it was the right way to go in his first professional Development Camp.

“I’ve done my best to kind of stay quiet, just listen, listen and absorb the most that I can,” he said.

Primeau doesn’t play like a prototypical big man. He doesn’t run around throwing his body into anything in his way. In the offensive zone, he showed a few nice facets of his game, including a solid wrist shot from the slot. He drove the net well on zone entries and used his big frame effectively, setting screens out front.

At one point, he forced the opposing center, Suthers, to follow him low and that was a net battle for the ages. He got good body position on the bigger man, despite his team’s failure to get a shot off on that specific sequence.

Although he isn’t the best skater in the world, for a big kid, he skates very well. You can see his comfort and stability in his edge work. He wasn’t falling all over the place. Seeing him listed at 205 pounds was quite the shock because he is still very slim. In transition and in the defensive zone, he did a good job of finding his assignments and using his long reach to help disrupt the opposition’s attack.

My favorite part of camp were the faceoffs between Primeau and Suthers. Mason is normally the big guy in the faceoff circle, but he finally had the chance to look up and see a man towering over him. Centers are usually much smaller than those two, which provided a unique experience for the boys.

“It’s definitely different,” he said. “I was talking to a couple of the boys on the bench and was saying I feel pretty small out there. It’s honestly a pretty funny experience because I have never played against somebody who is three or four inches taller than me.”

Just think of a combined 13-foot-3 of man taking those faceoffs. 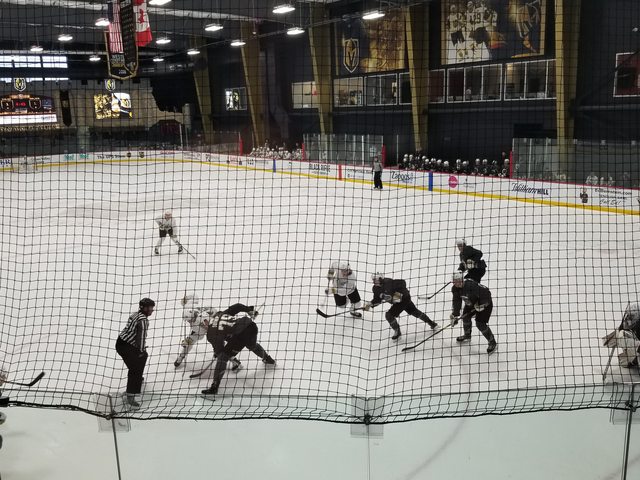 “It’s nice ‘cause the little guys get real down and you can’t get that far down on faceoffs,” Suthers said. “It gives you a little more of an even playing field. Mason’s a great player and it’s always fun going up against guys at his skill level because it’s going to be a battle every time.”

What does the future hold?

It will be quite some time before we see Primeau make his debut in the NHL. He has some growing to do, both physically and in his game. He admittedly wants to work on his first three strides to be more explosive on the ice and that will surely come with more muscle on that frame. For a kid playing in his first development camp, he acquainted himself very well. Only time will tell just how good of a player he will turn out to be, but the foundation is certainly there for Primeau to become a fan-favorite in Vegas and a fixture in the NHL when his gets his opportunity.

More From Knights On Ice